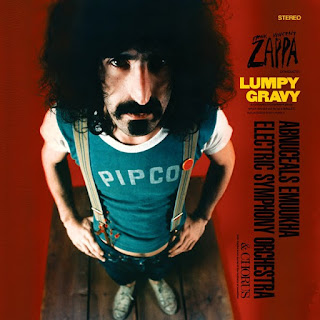 Album: Lumpy Gravy
Artist: Frank Zappa
Release Date: May 1968 (Re-released edition)
Date Listened: 27 January 2017
Remarks: Zappa's first solo record is a bit of a mess compiled from the original Lumpy Gravy (apparently a fully orchestral album) and a few bits of earlier material, stuff from the 'We're Only in it For the Money' sessions, and the usual bunch of strange psychedelic conversation and eccentrically juxtaposed sound effects. Despite the hodge podge, it is actually Zappa's best album yet on the chronology. His style is fully mature here and I can't wait to hear what comes next. The symphonic sections in particular are truly captivating.
Stand Out Tracks: Part One- but you ought to listen to the whole shebang