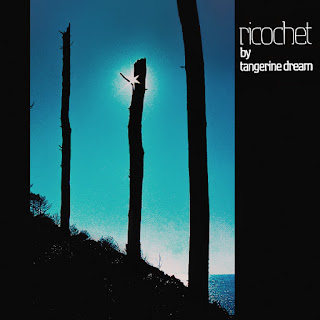 Album: Ricochet
Artist: Tangerine Dream
Release Date: December 1975
Date Listened: 25 September 2017
Remarks: As much as I loved Phaedra and Rubycon, I have to admit that they were quite similar in a sonic way. I had to listen several times to both in order to differentiate them clearly in my mind. After that, I was ready for a breath of fresh air. Ricochet is that breath of fresh air, as full of power as a breeze signaling the coming of Autumn. Compiled from live recordings, (their first attempt to do so) and featuring a return of the acoustic instrumentation largely relegated to the background after Alpha Centauri, and possessing an undeniable energy without sacrificing an iota of their classic sound, Ricochet is a masterpiece.
Stand Out Tracks: Both. Like many TD albums, it works best as a whole. Special notice goes to the opening of Part II.