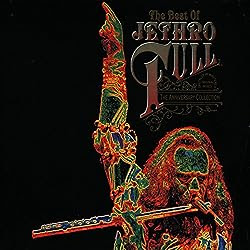 Whenever the subject of popular music comes up, I always talk about Jethro Tull. Most young people don't remember them, only recognize them from the few songs on classic rock radio, or (if they are into metal) they recall that they were the ones who sniped a well deserved Grammy away from Metallica. Older folks get this hazy glaze across their faces, as if you mentioned the sibling of a friend from elementary school or asked them what their favorite snack was in second grade.

Nevertheless, despite their fade from general public awareness, my top three favorite bands are still Jethro Tull, Jethro Tull, and Jethro Tull. This anomaly has a lot behind it, and if you are curious why I've written about Tull so much, then perhaps this'll help to explain it.

First off, it's important to define the band. Officially, Jethro Tull as an entity lasted from 1968 until 2014 when band leader Ian Anderson declared it dissolved, but in reality Jethro Tull is Ian Anderson. Anderson has written the vast majority of the songs released under the Tull moniker during it's 45 year existence and served as the lead singer, chief flautist, and oft-times guitarist. Perhaps more significantly, the untrained ear isn't likely to be able to distinguish between work released under his solo banner. The point is easily debated, but it will serve my purposes here.

One reason that Anderson's music first captured my ear is the diverse range of sounds he manages to capture. Describing the Jethro Tull sound to the unfamiliar takes a lot of genre name-dropping. It's clearly rock and roll of some sort (though not always) with a lot of heavy influence from blues, jazz, folk, world, and classical. The good fellows at ProgArchives.com label Tull a "Progressive Folk Rock" band, which is a nice term for it, though not all encompassing. In truth, no single descriptor can cover the entire catalog of Anderson's music because it's far too broad ranging in style. Tull in the mid 80s is a far cry from Tull in 1972 or thereabouts is a far cry from Tull in 1991 is a far cry from Ian Anderson in 2003. Some of the work is very atmospheric and ambient and some is deafening and snarling. Some of it is claustrophobic as a narrow alleyway on a foggy day down by Baker Street and some of it is as bright as a Summer day gazing into the sun. Whatever mood I'm in, I can find a Tull album to fit in.

I consider myself a "music before lyrics" listener, but Anderson's lyrics are among the best I've ever heard. In his prime, he was the best in rock at painting a picture, setting the stage, and casting your mind into unknown worlds populated by lecherous homeless men, eight year old prodigious poets, afterworld ghosts and medieval minstrels strumming on lutes as noblemen look on.  His words do all this without being stiltedly awkward and with a poetic flourish– although often with tongue firmly planted in cheek.

Perhaps the best way to truly understand, you have to listen to it yourself. If it's not your cup of tea, that's too bad.

I'll have another cup, before I go off to work.