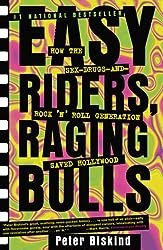 It's no secret to those that know me well that I'm pretty into pop culture and the arts. I love books, movies, TV, and music. However, it's also true that my taste is a little... well, out of fashion.

Of the top 36 highest rated movies on my Letterboxd, only 9 were made on or after the year 2000. I have a particular penchant for the Hollywood New Wave which began in the 1960s with films like Bonnie and Clyde and The Graduate.

My favorite band, as I explained in detail here, is Jethro Tull and they are not on the cutting edge by any standard. In fact, they unofficially disbanded around 2011 and some would argue they ceased to exist as an entity as early as 1980, although that point is up for debate. Tull was a byproduct of a similar cultural to movement to that of the Hollywood New Wave; the Rock 'n' Roll revolution. This artistic movement was kicked off by the Beatles and brought to maturity by a slew of creative groups following in their wake in the late 60s and early 70s.

What am I currently reading? Definitely not the latest bestseller. I've been catching up on Zane Grey westerns, Joseph Campbell's The Hero with a Thousand Faces, and C.S. Lewis' Miracles.

Of course, I'm exploring new material too. I just listened to the latest single from The Lumineers and my wallet sits open, awaiting their new album. Most anticipated film of 2016? Hail, Caesar! I'm also reading the Harry Potter books, which were printed during my life time. And I like them too.

But of course, the Harry Potter books are over. Fans are eagerly awaiting Fantastic Beasts and Where to Find Them while I casually thumb through what was for people my age, essential reading material ten years or more ago.

So why the fixation? Why do I always wait to catch a ride till the bandwagon has gone by?

Part of it is certainly a conservative upbringing. My parents were careful about what we were allowed to watch as small children and old things were perceived as safer viewing. Of course, this notion is a bit fallacious. Older doesn't mean more pure, as anyone perusing the annals of history will inform you. Film in particular, doesn't bear up this rule. Pre-code films are often racy and even Tarzan and His Mate, a 1934 film presumably marketed for wide audiences, features controversial full nudity.

Though my parents were conservative, they could hardly be described as fundamentalist. By the time I was entering my teens I pretty much had free choice in the matter, so there must be something deeper involved.

I'm not alone either. There's a huge subset of 90s kids and millennials who were born in the middle of a technological revolution. An avalanche of new devices, tools, and media hit us like nothing any previous generation had experienced since the industrial revolution.

And thanks to the youth culture movement of the 60s, all of that new media was targeted directly at young people directly. The Beatles and Star Wars made marketing executives realize that adolescents and young adults were the true cash cow, and now there's more material marketed to this demographic then ever before.

Maybe me and those like me (mostly, I freely admit, hipsters) feel a certain kind of nostalgia for an age we never lived in. We don't know what it's like to be unplugged. We've never lived in a world without rewind and fast forward buttons. The idea of having one source of music like a local record store is kind of romantic.

The past can be examined with rose colored glasses, but it's also easier to look back and see what has enduring power and what does not. A Greatest Hits album is always better than a brand new album, because you're listening to a selection of the best songs, picked for their popularity, their enduring power to the artist, or their historical significance. Even the best new albums will have some material ultimately judged to be fluff or filler.

In the age of the internet, everyone can create their own art identity. You can cut and paste your favorite parts of movies, music, literature, and culture in general into a collage that is uniquely your own. And the deepest well of raw material is the past.

Maybe that's why I find the arts of days gone by so compelling. There's always a chance to draw up something new out of the ashes.
No comments: